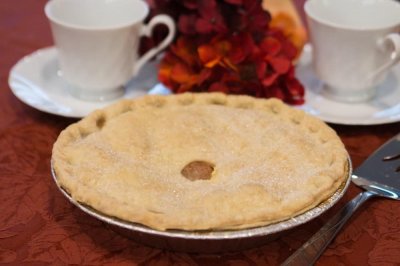 As the "most popular pie in America," nearly 30% of Americans say that apple pie is their favorite type of pie.

With such widespread popularity, it's clear that apple pie holds a special place in American culture. So, where did this iconic dessert come from, and how did it become such a beloved part of American cuisine?

Imagine savoring a warm, flaky slice of apple pie while learning about its origins and how it came to symbolize American patriotism.

Let’s learn more about the history of apple pie. Then, come on down and see us to try our delectable apple pie for yourself and indulge in an American tradition.

The History of Apple Pie

The origins of pie can be traced back to Ancient Egypt, whose crusts only held fillings instead of being eaten. These crusts, also known as "coffins," were later spread to Europe by the Romans.

The fillings for these early pies were often savory, made with meat or vegetables. Sweet pies filled with fruit did not gain widespread popularity until much later.

Although apple pie as we know it today may not have originated in the United States, the fruit itself has a long history here. European colonists first brought apples to North America from central Asia and the Middle East.

As early as the 17th century, apple trees were planted in the Massachusetts Bay Colony. As a result, apple orchards quickly became a common sight in the colonies.

In the late 18th century, Dutch immigrants introduced apple preservation techniques. This is a big part of what led to apple pie's popularity in America. In addition, the flaky pastry crust that is now a hallmark of the dessert was introduced by German immigrants.

Years later, 1796 saw the publication of "American Cookery," the first American cookbook, which included a recipe for apple pie.

At Linda's Bakery, we use only the freshest ingredients to create our mouthwatering apple pies. We believe in honoring tradition and adding our own personal touch to every pie we bake.

Apple pie is traditionally associated with American patriotism and national identity. During World War II, soldiers famously claimed they were fighting for "mom and apple pie." Since then, apple pie has become a symbol of family and home for many Americans.

Despite its reputation as a purely American dish, apple pie has been influenced by several cultures and traditions. The English were the first to create a recipe for apple pie. The Dutch and Germans both played a role in its development in the United States. Additionally, many staples of American cuisine, such as the hamburger and macaroni and cheese, have their roots in other countries.

This diversity is part of what makes apple pie such a fitting symbol for America. It represents the melting pot of cultures and influences that have shaped our country.

Experience a Taste of American History With Your Local Pie Bakery

Due to its long and rich history in the US, apple pie has become an iconic American dessert. For a taste of this beloved American classic, stop by Linda's Bakery and try one of our delicious apple pies.

However, we offer more than just pies! We're known locally in West Salem, WI, for all different types of desserts. Whether you're searching online for a pie bakery, donut bakery, or a cupcake bakery, we've got you covered. Are you craving traditional breads and buns, or are you looking to mix things up with a cupcake bakery? Either way, we have the perfect dessert for you.

A Brief History of the Birthday Cake

When Should I Order My Wedding Cake?

Popular Christmas Desserts to Try in 2022

Linda's Bakery in the news

Order online for Thanksgiving and get 1 dozen dinner rolls FREE.